Transcribed, edited and translated by Christian Troelsgård, University of Copenhagen, 2021.

Introduction by J.G.G. Jakobsen, Centre for Dominican Studies of Dacia, 2021. 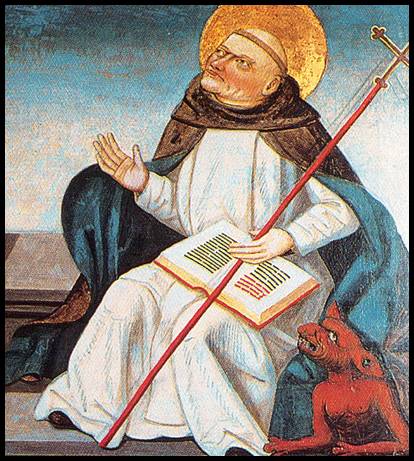 The most prominent Dacian contribution to Dominican theological literature was authored by Fr. Augustinus de Dacia (†1285), who was prior provincial of Dacia in the periods 1261-1266 and 1272-1285. Nothing is known about him before his first election as provincial in 1261, but he most likely originated from one of the Danish convents. He was absolved from the provincial office for unknown reasons by the General Chapter in 1266, but was nevertheless still referred to as prior provincial, when excommunicated by Cardinal Legate Guido in 1267 along with other ecclesiastical supporters of King Erik V Glipping against the fugitive Archbishop Jakob Erlandsen of Lund. Fr. Augustinus was reinstalled as provincial in 1272 and this time remained in office until his death in 1285. As prior provincial, he was enjoined to administer the Scandinavian collection of papal taxes and monetary aid for the crusade to the Holy Land, and to personally engage in the preaching of the Cross for the Holy Land, just as he was papally commissioned to act as judge in a dispute between Bishop Tyge of Århus and the Cistercian Abbey of Øm in 1264. Furthermore, he took part in a diplomatic meeting between the three Scandinavian kings in Horsaberg in 1276. Provincial Augustinus is mentioned in several of the letters by Fr. Petrus de Dacia, and must have shared the positive attitude of Petrus towards Dominican pastoral care of religious women, as it was during his offices that the province saw the foundation of the first two Dominican nunneries in Roskilde (1263-64) and Skänninge (1281).[2]

At some point in his career, Fr. Augustinus de Dacia wrote the Rotulus pugillaris, of which the title can be translated as ‘the tiny handbook’. It is probably a short version of Augustinus’ own Compendiosum breviarium theologicae,[3] to which he refers in the Rotulus, but whereas the handbook version has survived in two extant manuscripts, the more extensive work is long lost.[4] Still, the handbook version of the Rotulus was without doubt also the most read and influential of the two, used as a practical tool for the friars’ studies and preparation for the task of preaching. The Rotulus can be described as a short manual for beginners in the study of theology, offering a condensed presentation of all useful and necessary theological knowledge that a friar needed to acquire before being allowed by his prior to preach. In the prologue, Fr. Augustinus emphasizes the importance of a firm handling of pastoral knowledge. The friars should know the fundamental definitions and concepts of Christian faith in order to describe and legitimate good behaviour. He also had to learn the doctrine of virtues and vices, the Ten Commandments and sins, the Sacraments and means of grace. Furthermore, he was expected to cope with Christian dogmata and thus be able to explain and anchor particular rules within a Christian worldview.

The text consists of 15 chapters each treating a theological topic, mainly by defining it without any further discussion. The topics include: the science of theology, the Creed and the articles of faith, angels and souls, grace, theological virtues, the gifts and works of compassion, blessedness and contemplation, prayers, plagues, vows, sins in general and specific sins, Sacraments, distinction of times, and Antichrist and the Final Judgement. Almost all topics are presented in either three, four or twelve categories, regularly concluded by one, two or three mnemonic verse(s) in the form of intended hexameters and/or disticha at the end to sum up the main teaching of each section. An example is a verse, which became widely popular in the Middle Ages, used to summarize the four ways of scriptural exegesis: “Littera gesta docet, quid credas allegoria. Moralis quid agas, quid speres anagogia.”[5] Indeed, this was perhaps one of the most important practical methods that the young Dominican friar was taught by the Rotulus, that is to expound the Holy Scripture according to the system of the four senses. By adopting the exegetical technique of the universities, the friar was enabled to break down the knowledge of the Bible into an easier accessible form for his lay audience.[6]

The teaching of Rotulus is based on a number of classical texts, including the inevitable church fathers Augustine, Gregory the Great, Peter Lombard and Gratian. Fr. Augustinus also includes Aristotle, from whose work De anima he draws the essential knowledge about soul and wisdom. Of mendicant scholars Augustinus only refers explicitly to Fr. Raymundus de Peñaforte OP, but his work also shows similarities with Fr. Albertus Magnus OP and Fr. Bonaventura OFM (Breviloquium), and echoes – directly or indirectly – a familiar and contemporary manual in theology by Fr. Simon de Hinton OP, the prior provincial of Anglia (1254-1261).[7] More surprisingly, however, it is difficult to point to any direct influence from Fr. Thomas Aquinas OP, which may indicate that the Rotulus was written early within Augustinus’ career, before the teachings of Aquinas really broke through.[8]

Fr. Augustinus de Dacia’s Rotulus pugillaris was apparently meant for the education of young Friars Preachers in his own province. We know that a copy existed at the Dominican convent in Helsingborg, as one of the two extant versions according to an inscription belonged to Fr. Nicolaus Lagonis from this house;[9] most likely he is identical to a lector of that same name known in the convent in the 1370s. It has even been suggested that certain elements in it reflect the ongoing missionary work in Estonia, which may be expressed in the description of the Friars Preachers as fidei pugiles and in a slight variation in the focus of the two extant versions on moral theology in the one and apologetics in the other.[10] This educational text book from Dacia may, however, also have played a role in the Order’s teaching elsewhere in Europe, especially in the German provinces, where the title appears in several library lists, while the only other extant copy is found at the University Library of Basel.[11] A final indication of an international recognition of Fr. Augustinus’ Rotulus is given in the fact that it is included in a late medieval list of the most important authors and works of the Dominican Order.[12]

The present new digital edition is based on both manuscripts and transcribed by Christian Troelsgård, University of Copenhagen, with some corrections compared to the latest edition by Walz noted in the introduction. The most important of these concerns the overall title of the full (lost) original work and that ‘anger’ is re-introduced as one of the seven capital sins defined by Saint Augustine. Below are links to a full transcript of the Latin text with an introduction in English, as well as a version with a parallel translation in Danish 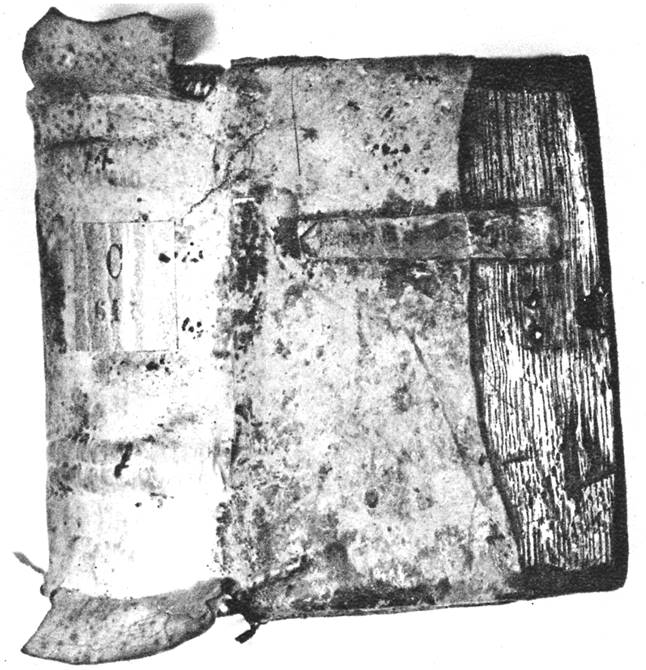 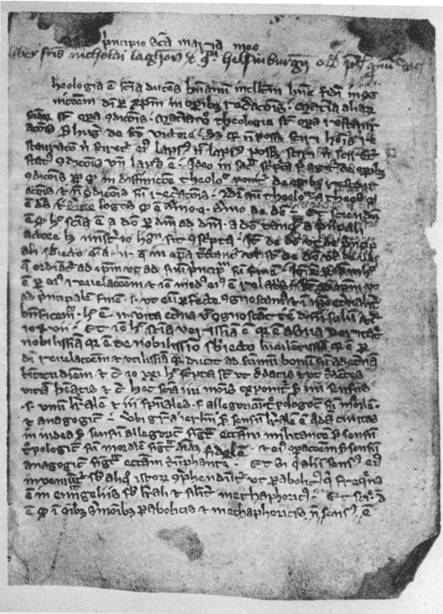 Notes for the introduction

[1] No known image of Fr. Augustinus de Dacia is preserved. This picture of a blessed Friar Preacher holding a book, while sitting on a devil, is a detail from an altarpiece in the former Dominican church of Our Lady in Århus, Denmark, supposedly made by the Danish master artisan Claus Berg around 1530. The friar is not straightforwardly identified. The most commonly made identification is with St. Dominic himself. One alternative suggestion (Halvorsen 2002, pp. 14-15) is, however, that he represents Fr. Albertus Magnus (c.1193-1280), a leading academical capacity of the Dominican Order teaching at the Order’s Studium generale in Cologne since 1248, and thus a likely contemporary teacher and role model for Fr. Augustinus.

[3] Earlier referred to as Compendiosum Breviarium Theologiae, as in Walz’ editions and the dependent literature. However, the only manuscript that brings the prologue, B = Basel, Universitätsbibliothek B X 9 (c. 1400), reads clearly theologice, sc. theologicae <scientiae>, a reading corroborated by the rubric of the first of the fifteen chapters.

[4] The Compendiosum Breviarium Theologicae is in turn characterised as a summula (diminutive), probably in order to distinguish it from major works as e.g. Fr. Thomas Aquinas’ Summa Theologiae.

[5] “The literal reading teaches what happened, the allegorical what you ought to believe, the moral what you should do, and the anagogical what you should hope for.” In recent years, Fr. Augustinus’ couplet has received extra attention as it was cited twice by Pope Benedict XVI in 2008 and 2010. Harrington 2018, pp. 50-51.

[7] Boyle 1978, p. 254; Mulchahey 1998, pp. 206-207. Although both being written at about the same time by priors provincial on similar overall topics and with a similar audience in mind, and both citing from Raymundus and Albertus, the structures of the works by Fr. Augustinus and Fr. Simon de Hinton are, in fact, quite different. Troelsgård (forthcoming).

[11] In addition to the two extant manuscripts, Christian Troelsgård has found three medieval manuscripts with quotations from Rotulus pugillaris via the ‘Manuscripta Mediaevalia’-database. Troelsgård (in email correspondence, 2021).