From the necrology of the Friars Preachers in Ribe

Presented by J.G.G. Jakobsen, Centre for Dominican Studies of Dacia, 2013. 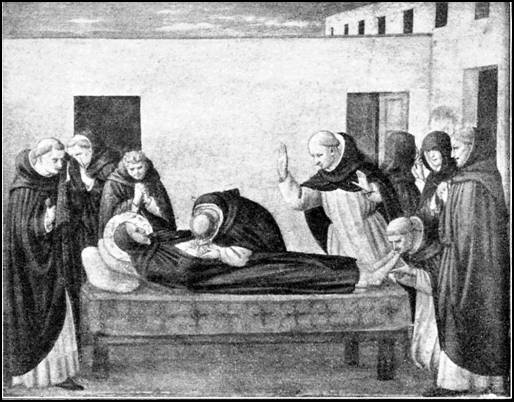 The medieval monastic convent did not only consist of the brethren or sisters living there. In one sense, also its deceased members remained an important part of the community with their memory being kept alive for future generations by readings of their names in the monastery church on the anniversary of their death days, combined with a common prayer from their live brethren and sisters for the benefit of their souls. In order to keep track of whom to pray for on each day, monastic communities kept ‘necrologies’, calendars with entries of names on deceased members of the community attributed to the particular day of their death; only rarely was the year of their death also included, as this was less important for the memorial function.

Such necrologies were undoubtedly kept at every Dominican convent in the province of Dacia, but only one of them is partly preserved, as fragments of the necrology for the Friars Preachers in Ribe. The parchment on which the necrology was written found a new use around 1600, long after the dissolution of the convent, as binding for the register books of the town hall in Ribe, for which purpose two of the necrology pages were cut into shape. The extant fragments from this book binding cover 104 days or less than a third of the entire necrology, from within the period 1 May to 12 October.

Although the fragments do not include any title of the list, it is evidently a necrology for the Dominican convent in Ribe. It includes the names of 83 deceased friars covering the entire lifetime of the convent, starting with Fr. Bero, “the first priest, who constructed the house” and Fr. Rano, “the first prior provincial”, to Fr. Johannes Conradi and Fr. Petrus Johannis, who both died in 1528. The necrology is obviously a transcript, apparently made by one hand (below marked as black text) around the 1440s (latest dated entries by this hand are from 1441), with later additions by other hands (marked as brown text) (Kinch 1853-56, 493). However, as the later hands also have added the abovementioned ‘constructor’ of the convent, Fr. Bero, it is not possible even to date the deceased ‘before or after 1450’ from the hands alone. Only in eight cases does the necrology itself provide the death years (from 1309-1528).

The extant parts of the necrology have 85 entries of 83 deceased individuals and two general anniversaries – one for the benefactors of the Order and one for all the friars of the Order. At least 77 of the individuals seem to have been friars at the convent in Ribe. To judge from this, the entire necrology would have contained the names of about 270 deceased conventual friars. If each friar on average had an active career of 20-25 years, this would mean that for the entire 300 years-lifetime of the convent in Ribe, from its foundation in 1228 to its dissolution in 1531, it was manned with an average of 18-22 friars.

The extant fragments of the necrology for the convent of Friars Preachers in Ribe are preserved at The Provincial Archives of Northern Jutland (Landsarkivet for Nørrejylland) in Viborg. It has previously been published with comments by J. Kinch as ‘Nogle Brudstykker af et Nekrologium fra Dominikaner-Klosteret i Ribe’ in Kirkehistoriske Samlinger 1. ser. vol. II (Copenhagen 1853-56), 492-500.

The colour of the text indicates if it was made by the main scribe, from c. 1440s (black), or by one of the later hands (brown).

Fragment for the period 1-12 September of the necrology for the convent of Friars Preachers in Ribe.