Introduction by J.G.G. Jakobsen, Centre for Dominican Studies of Dacia, 2014. 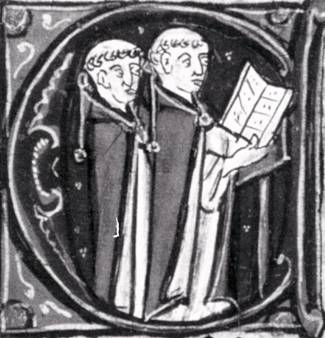 A list from the 1320s of internationally acknowledged Dominican authors and literary works knows the existence of five sermon collections ascribed to four Friars Preachers from the province of Dacia: Fr. Olavus Dacus, prior provincial of Dacia in 1286-1302, is recorded to have written a Sermones de tempore; Fr. Johannes Dacus and Fr. Conradus of Sweden each authored a Sermones de sanctis; and Fr. Mathias Ripensis is listed for both a Sermones de tempore and a Sermones de sanctis.[1] Only one of these five sermon collections is extant: the Sermones de tempore by Mathias Ripensis. The identity and time of activity for Fr. Mathias Ripensis is not known with certainty, but it is generally assumed that he was a Danish friar affiliated to the Dominican convent in Ribe around the first quarter of the fourteenth century. He may be identical to the “Fr. Matheus, lector Ripensis” mentioned in the necrology of the Dominican convent in Ribe; the necrology entry, however, only states the day of his death (3 March), not the year, which to judge from the preserved transcript could be anything before 1450.[2] When it, nevertheless, is possible to date his work more precisely to the early fourteenth century, it is due to its appearance on the oldest version of the abovementioned list, which was made around 1323; without much further evidence, Scandinavian scholars have cautiously dated the sermon collections of Fr. Mathias Ripensis to the decades around 1300.[3] Apart from explicitly stating the authorship,[4] the preserved sermon collection adds just a little extra knowledge about the background of its author, as he in one of his sermons refers to Scandinavian language as his native tongue.[5]

In his Sermones de tempore, model sermons are suggested by Fr. Mathias for almost every Sunday of the year, starting with Advent, and a few other feast days, including two sermons for Easter, two for Christmas and one for Corpus Christi. In two of the extant versions, an extract from the Legenda aurea is inserted between the two Christmas sermons. Whereas the first models of the collection are quite extensive and detailed, they are increasingly shortened as it develops, obviously expecting its user to be still more familiar with the practice. The common feature is to present the basic structure of a Dominican sermon, show how to elaborate over a fixed topic, and how to support the statements and argumentations with references to the Bible, collections of exempla and legends, and various types of encyclopedia stretching from history over natural science to canon law.[6] The preserved sermons of Fr. Mathias Ripensis place him completely in line with traditional Dominican sermon collections of the thirteenth century in regard of composition, form and content.[7] The composition of the sermon is rooted in rhetorical practice reaching back to antiquity with the goal to persuade the audience. Analogous to classical speeches, Fr. Mathias composed his sermons in sections and according to elements such as theme, prologue, division, confirmation and conclusion. The basic source referred to in his sermons is the Bible, with numerous scriptural quotations used to prove assumptions of his argumentation.[8]

The Sermones de tempore by Fr. Mathias Ripensis is transmitted in three different manuscripts, all three preserved at the Uppsala University Library. The oldest (Cod.Ups. C 342) is an incomplete version from the middle of the fourteenth century, followed by two complete transcripts (C 343 and C 356) from the fifteenth century; they all contain minor differences from the others. All three have been preserved through the extensive library of the Brigittine Vadstena Abbey in Sweden, the two youngest even seem to have been produced here.[9] The sermon collection has never been published until now. All three versions have been transcribed by Johannes Schütz for the use in his doctoral dissertation ‘Hüter der Wirklichkeit - Der Dominikanerorden in der mittelalterlichen Gesellschaft Skandinaviens’ from 2013, and it is this transcript that Dr. Schütz kindly has offered for a web publication in the series Scriptores ordinis predicatorum de provincia Dacie online (2014).

Notes for the introduction:

[5] “..sancto Georgio qui in lingua nostra Jurian vocatur…” C 343 fo. 35r / C 356 fo. 2r. It is not possible from the name form Jurian to determine exactly which of the Scandinavian tongues Fr. Mathias was referring to.

Literature referred to in the introduction: